Ok, this is going to be a several part recap. I'm not sure what part to start at...The super support team that I had, the amazing RBF meet up, my generous hostess, the marathon...

The marathon, First Half Recap:
The night before the marathon I had a very restless sleep. I was busy worrying about race strategy, worrying about the time change, worrying about breakfast, worrying about meeting up with David before the race. All the worrying did a number on my tummy and I was up out of bed several times to visit the potty. When I finally got up in the morning it was more upset tummy and more visits to the potty. I thought the feeling would pass as I got closer to the start. I did forget about it for a bit when Hubby, Dad, AnneMarie and I arrived at the Metro and was surrounded by other marathoners and their supporters. The Marathon Buzz was in the air and it was catchy. When we got off the train at Arlington cemetery and made our way over to the start the nerves were gone and it was full fledge excitement. 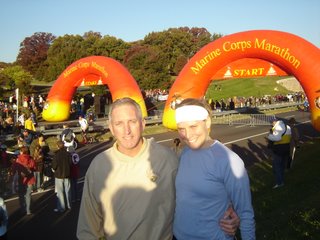 A couple pictures and we headed straight for the porto potties. The prayer, the national anthem and the fly over were next. It was a moving moment to see so many people standing at attention as soon as the National Anthem came over the speakers. I was able to find David and we again went over our gold, silver and bronze times. I talked to the Little Miss over the phone and got one last "Run fast Mom, Good Luck" and we headed into the crowd to await the cannon start. We were in the second wave so we had a bit to wait and then they announced that there was a hold up on the course and the start would be delayed slightly. Turned out that someone went down 100 yrds out from the start. (I haven't seen anything more on it).
Once we were finally off it was very slow and very tight. I found it hard to get my footing and stride moving smoothly. No worries we were running and a slow start is good. It was right after the start line that I looked up to the bridge above and noticed my race crew. I started waving and yelling and as soon as they heard and saw me they were holding up the signs. Only problem was my Dad was so excited that he didn't realize he was holding it upside down. Everyone around us was yelling to him to turn it around and making gestures. Dad didn't get it and thought they wanted him to cheer louder!
The first mile marker came upon us at 11:11. Slow but okay. We found more room in the second mile and gained 16 sec for a 10:55 mile then up another hill and were amazed by the man pushing a triple jog stroller. Mile 3 still making up time with a 9:59 mile. It was starting to warm up and I was looking forward to meeting up with the support team at mile 4 to dump my gloves and long sleeve shirt. David was thinking the same thing. Sure enough with their military 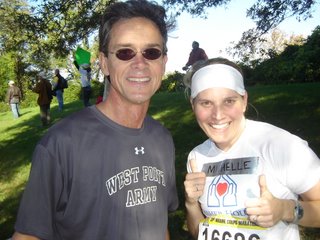 navigational skills Hubby and dad were right where they said they were going to be at Mile 4 and David and stripped a layer.
Over Key Bridge and into Georgetown we finally clocked our goal pace of 9:50. Mile 5 more steady pace with a 9:55. The course was still a bit crowded but we were finding our zone. Mile 6 got a little fast at 9:22 and Mile 7 10:35-it was time for a potty break. As I went into the woods I reached out to grab a branch for support and found that this bathroom had already been used -EWWWWWW!!! No bother, I finished my business and found David. Here comes the big mistake we picked up the pace and did a 9:17 mile for Mile 8. I think part of it was that I was feeling relieved after using the potty and we knew we were due to see Studdly and Sr Studdly anytime. Sure enough when we passed by them we were moving so fast that Hubby didn't have time to get a photo. Mile 9 9:31, Mile 10 9:32. Slow Down!!! I kept saying it in my head but my body wasn't responding and the next mile was 9:08. I was starting to feel worried that I wasn't going to be able to hold out later in the race and I tried to reel us in. Mile 12 9:33 and Mile 13 9:58 and a 2:09 Half time. 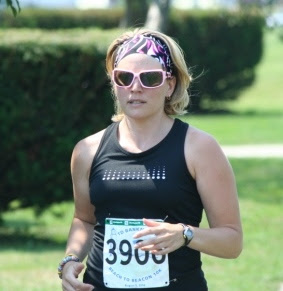 I am a military wife, runnin' momma to 2, Beachbody coach! I love all things fitness and health related and want to share my passion with you.